The overriding stunner on the D4 is its high ISO performance.  In other words, it takes damned good pictures in very low light. This is great fun indoors, with people, but it becomes positively transformative outside with a macro lens. The usual problem with these is finding enough depth of field to make a picture in which the whole of the bug is in focus. With a high ISO and low noise, ramping up the numbers bring the focus under control.

As this is the big time of year for all things creepy crawly and flowery, I took the D4 and an old 105 macro out for a run the other day. The cow parsley alway offers a captive show, being apparently irresistible to any thing resembling an insect.

After a few minutes I came across this couple. 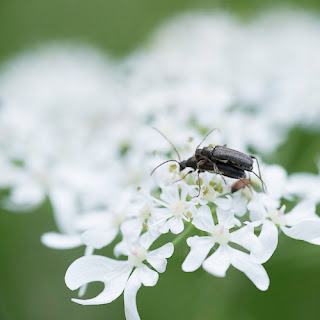 In my usual short-sighted way, it wasn't until I was checking the image for focus in the monitor that I noticed the couple-ness. In approaching the plant I brushed some grasses which, although not directly touching the cow parsley, did appear to have some kind of mechanical connection. The insects' ground moved beneath them. They ignored it, far too absorbed in what they were doing. 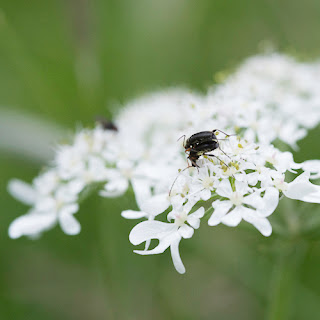 After a few of these transmitted wobbles, they became mildly pissed off, muttering about respecting an insect's privacy. They headed slowly towards the edge of the flowers as if preparing to take off and disappear, the last inhabitants left on this particular planet. 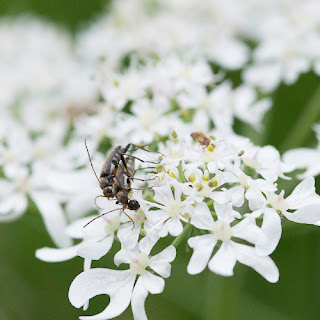 But I had misinterpreted their intention. There was still stuff to do, so they weren't about to leave their love nest. Rather than taking off from the edge, thy did that one thing that makes me want to be an insect: they walked over the edge and turned the floor into the ceiling, and the ceiling into the floor. 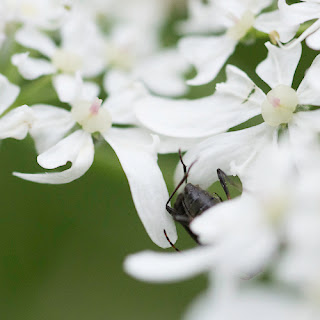 A moment later, they were back doing what they wanted to do, only this time hanging upside down from the underside of the cow parsley 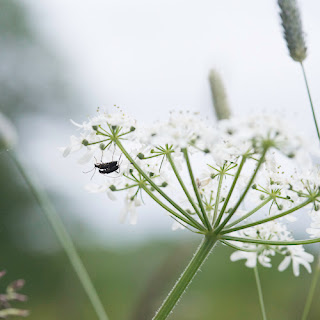 Getting these pictures onto the computer,  I fired up Lightroom 4 and pulled the pictures in. The latest version has the controls layed out in a new way. It's the first time Adobe have moved away from the old wet, darkroom, analogy, and it's a triumph. Backlit images used to be hard to control. Not any more. 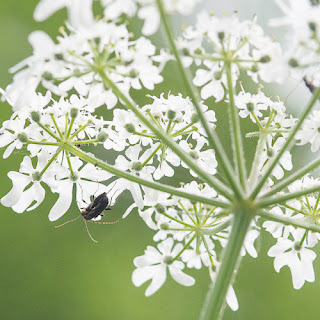 Looking at these, in this colour space, there's more that could be done, but I'll leave them like this for now. Anything you you think of that might improve the images, it can almost certainly be done, and easily. 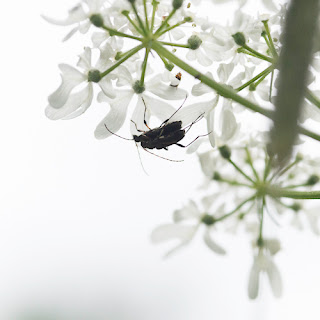 It would be useful, but not essential, to know what these insects are.  It's not that I'm a bug freak, just that there's something frustrating about having a picture in which I can't put a name to the contents although there are occasions when having to make up a name serves the image better. I'll show one of those in the next post. 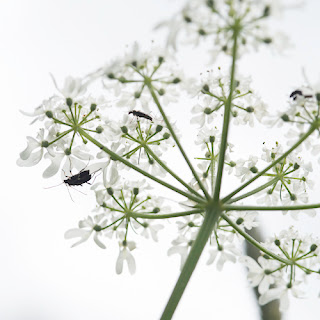