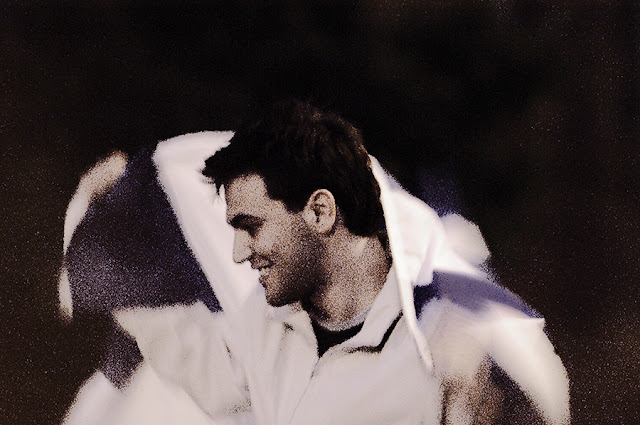 At the bottom of the street is the Greek Orthodox Cathedral of London. That makes Moscow Road, on which it sits, a cultural collection point for Greeks in London.

In 2004 Greece won the Euros, much to everyone's astonishment, not least their own. That night the celebrations filled the street, with dancing and shouting and music and fireworks and real joy.

People wrapped themselves in flags, the whole street turning blue and white. I was out there with an early Nikon DSLR, the D100, I think. (The exif datas has gone from this copy, and I'm not about to connect the archive.)

I took hundred of pictures, but this one seemed to sum it up. He was sitting on his girlfriend's shoulders (they took turns), the upward angle giving that slight sense of movement to the image; the blue of the flags has all but gone, yet still makes itself known, even under the sodium light; the noise has the same dramatic effect as grain; and, above all, he looks properly happy.

It doesn't matter, because all I have to do to make this picture complete is to give it a name, and it can only have one name: Greek Victory.

This evening, Greece plays Germany in the second Euro 2012 quarter-final. I don't think Moscow Road will be blocked tonight.
Posted by BOF at 11:06