If you've read the previous posts, you'll know...but for the rest of you: I was in China, doing a whistle-stop tour of artists in their studios, photographing them and their environment. Hack stuff, really, with a more indulgent attitude...

I was about to get onto a very, very fast train and go a long, long way in a short time.

I'd done this before, and in China too. In 2010 I'd travelled from Hangzhou to Shanghai and stuck a Flip to the window of the train. This is a shortened version of the trip, including a simulated at-the-same-speed drive back to the hotel from the station.

I don't think there's a square metre of waste ground visible in the whole thing. It's all homes or factories or roads or agriculture or power generation or railways or canals or shops or hotels or...

It's still over 30 minutes long, and fairly lo-fi, in order to come in under the blogger size rules...blah blah blah... 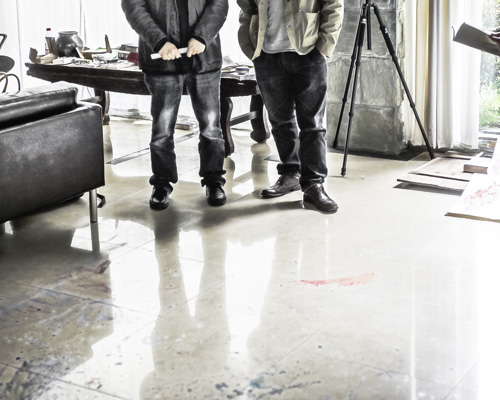 It was a relief to walk into Xiao Kegang's studio at the end of the day. Its brightness and simplicity (a glass-fronted street-mall shop space) made the previous visit seem stifling. 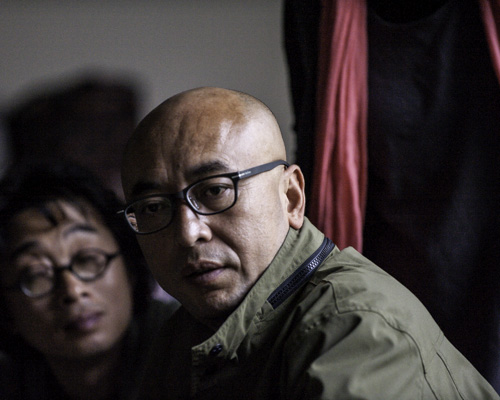 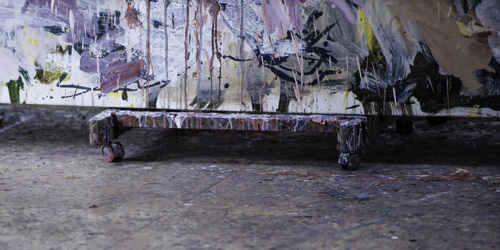 Below, the tones of his paintings were beginning to create a blurred edge with the marble floor; above, the building leaked in harmony with his lines. 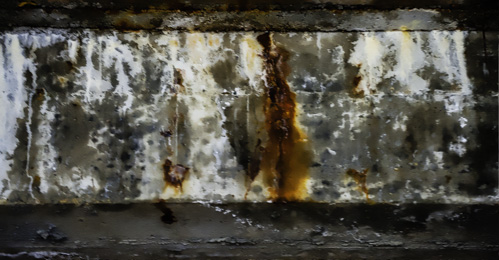 A messy, unfussy tray held the tea. Everything felt both impermanent and assured. His slashes of paint made compelling pictures, his studio, shop, space, whatever you wish, was as welcoming as he and everyone around him.

Xiao was one of a few of the artists we visited whom I'm sad not to see over here for the Edinburgh show.  When I walked into his studio, it was the first time since leaving Heathrow, touching down in Beijing, rushing to another internal flight, arriving late at a new hotel, getting up to no coffee and starting...it was the first time I'd felt relaxed all day and billiard balls with backlight are always a big bonus... 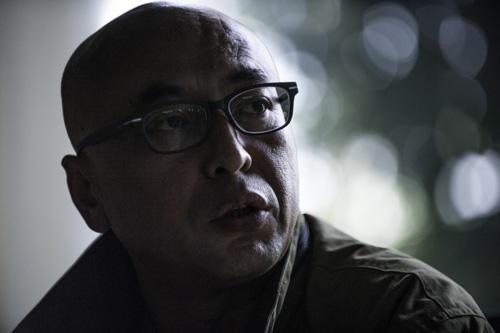 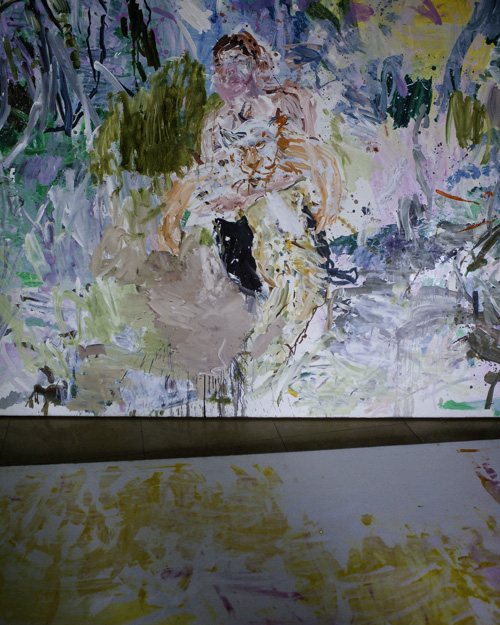 Day one ended with a small banquet. The next day would see us cross China on the extremely fast white train.

He Duolingh, he not a beatle 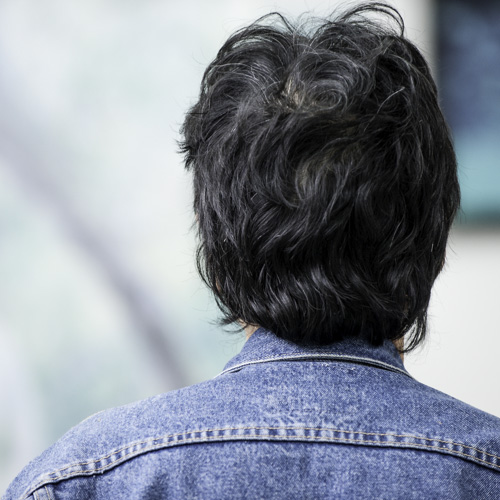 He Duolingh bears a disconcerting resemblance to Paul McCartney so it's a relief to see that his hair is not dyed, that there is variance of colour, all the way to grey, contained in its palette. Either that, or he's got a better hairdresser.

The resemblance isn't just personal: the work has an overall sugariness tempered with attempts at something harder. It has a smell of David Hamilton as well, an echo reinforced by the net strung across the gym-sized studio and a pile of sportswear in the corner. And the evident joy taken in conducting simultaneous interviews has a familiar, beatle-y ring to it. 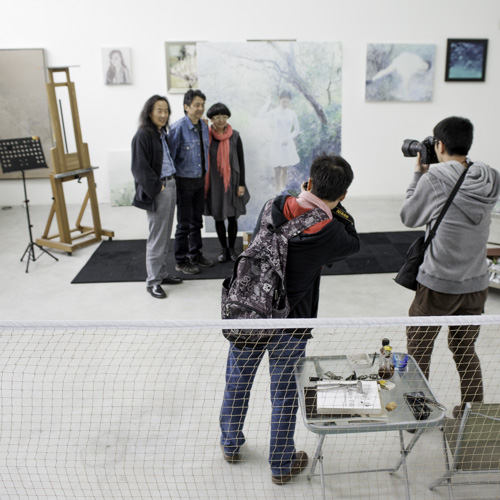 Visiting He Duolingh's studio was a good introduction to the culture of the successful artist which seems to be thriving in China. He lives and works in a purpose-built enclave of artists' studios, constructed in an inward-looking circle. His studio is in a little side road, the tail on the Q, the superior studio with its own leisure facilities beyond the netball court. In a way that was to become familiar, he started the interview waiting for every question to be asked then translated. Before long he was interrupting the translator or answering the question before it was translated. 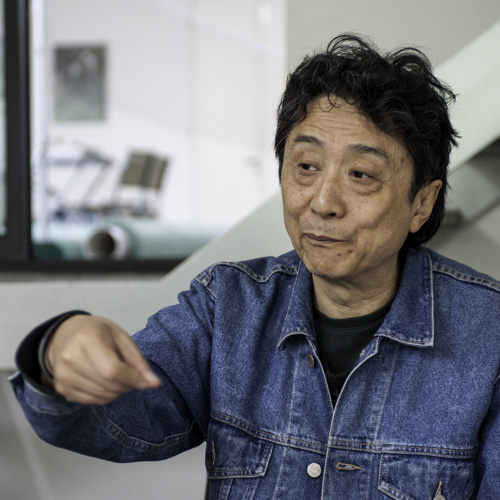 Did he, like some would later, eventually break into broken English in frustration at the translation? Maybe - I don't remember, because there was something increasingly uncomfortable about the works around us - not the rather fay, wireframe bicycles and cellos, but those Hamilton-like canvases. Dodgy, I'd call them. 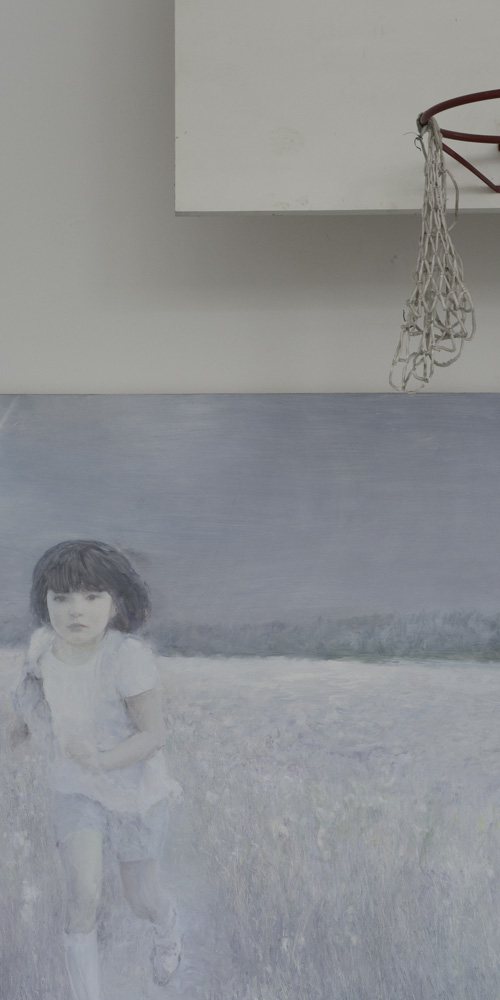 As a little after-thought, a dessert to his main course,  He took us to visit a neighbour in the enclave,  a young man about whom they all agreed he must have considerable backing from rich parents, given the cost of the studios, the quality of his materials, and the swankyness of his car. As for his work, this tribute, or fan-wall, or obsessor, to Avril Levigne doesn't seem that different to a million teenagers' walls. It's not a surprise to discover that we have no record of his name. 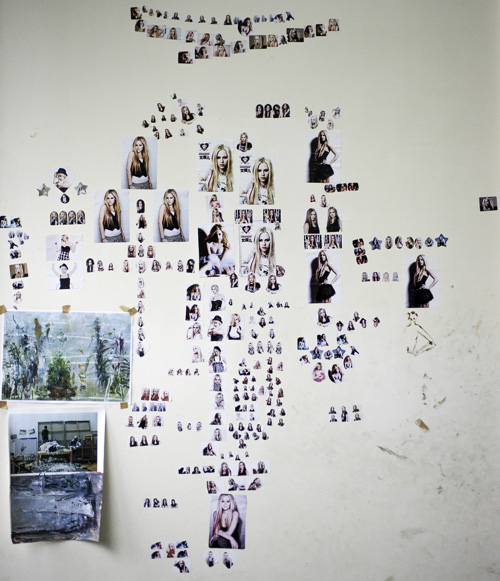 Moving Beyond: He Gong

In April 2012 I accompanied Janet Mckenzie Spens on a trip to China in order to interview and photograph painters in their studios. The expedition was the result of a chance meeting on a train between a Chinese poet and a young Cambridge graduate. It culminated in the show,  Moving Beyond, which opened at Summerhall in Edinburgh on July 31st and runs for 6 weeks.

The initial choice of artists were largely of an age which meant that, having first trained in their art, they were then sent to work in fields and factories, separated from family and friends, unable to pursue their artistic ambitions.

A change of attitude at the highest level saw a reversal of this. He Gong was one of the first allowed to leave China in order to study in the West. He met us from the plane driving a white, long wheel-base Defender of which he is vastly proud, all spattered in premiership football club stickers. 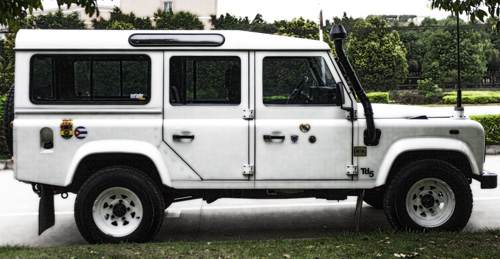 He Gong loves to talk. There is a constant sense of subversion in his growling voice, a subversion which keeps sliding into humour, often self-deprecating, but usually with a sharp point. He is that rare person, an artist who listens to what other people have to say.

The university at which he teaches does not, in his opinion, provide enough accommodation for students; he has bought a couple of small apartment blocks next to his studio, so that he is always available to his students. The resulting atmosphere is akin to a mixture of miniature kingdom and amusement park. 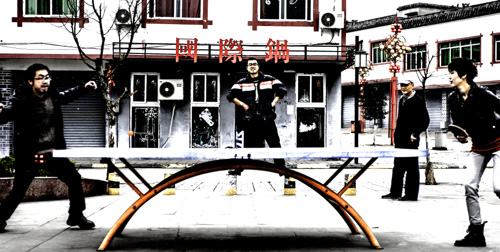 He Gong's studio is far from the gob-smacking immenseness of many that we visited. Parked at one end is a replica of Che Guevara's motorbike which He Gong had intended to use on a re-creation of the famous ride. However, that plan had fallen at the first fence when he wasn't allowed to import it. He did still make the ride, albeit on a Yamaha. 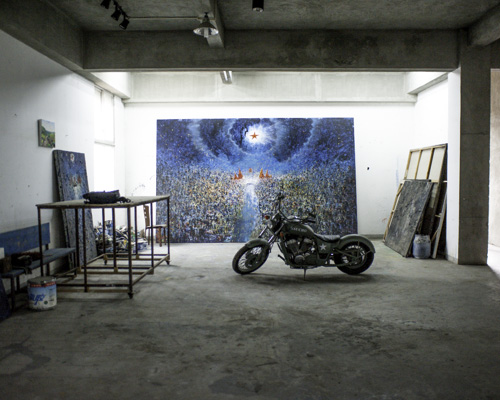 In the way that it often seems to happen in China, it transpired that the hotel we were staying in (a modern, business man's hotel, catering to Chinese rather than foreigners, and thus having no coffee available in the mornings) was owned by He Gong's brother. A small banquet appeared at dinner time. He Gong's appetite is as enthusiastic as everything else in his makeup. He's a charming man, warm and welcoming. When there, he told me that he often drives to Tibet with his students. I asked him about this again two days ago. It appears that I'll be joining him on the Tibet drive, either this Autumn or in the following spring. Watch this space. 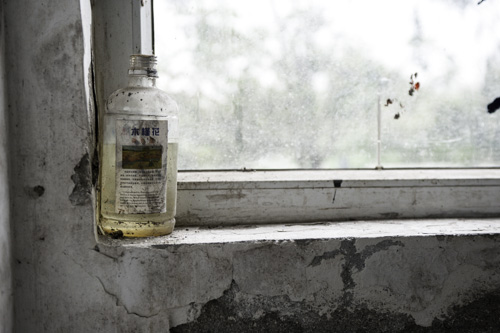