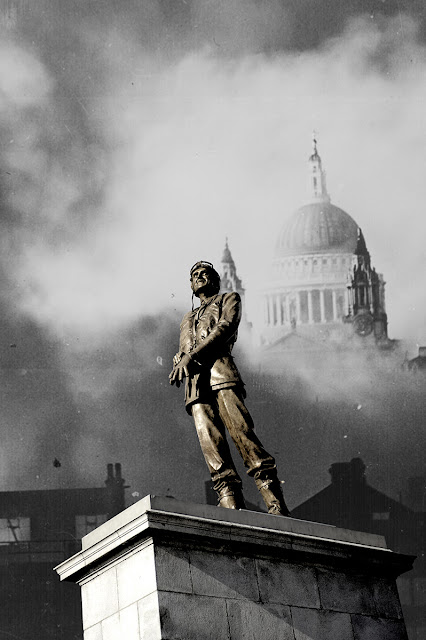 The background image we all know. I obtained it from the National Archive website, which states that all images are in the public domain, unless it is specifically stated to be otherwise. The photographer (I believe it is Herbert Mason) is not credited on the site.

The Fourth Plinth website tells us the subject of the sculpture (Air Chief Marshall Sir Keith Park, who co-ordinated the allied air forces in the Battle of Britain) but does not name the sculptor on the initial page. His name is Les Johnson.

The photograph of the sculpture on the plinth was taken by me.

As I understand it, I could use this resultant image in any way I choose, including the (unlikely) option of taking payment for it. Yet I would clearly be using the work of others for my own gain.

Furthermore, under current anti-terrorism law, I could have been arrested for taking the photograph, even though it is a public sculpture in a public place.

Any namby-pamby consideration of pixels and involvement are blown away by Don McCullin's show, Shaped By War, at the Imperial War Museum North in Manchester. I grew up looking at his images in the Sunday Times; his books are on my shelves; and a print of "Shell Shocked Marine" hangs on my wall. Yet his show still blew me away, as if I'd never seen a McCullin image before. This is in part because it's a fluent and encompassing selection but even more because the new prints (made by him) seem to bring a another level of impact to sometimes familiar images, smacking the viewer right between the eyes.

Thankfully, he has also included his more contemporary work in landscape and still life. They are beautiful photographs, serving to remind us that his skill was not just about being in the right place at the right time (perhaps substitute wrong here, given the subject matter) but also about having an eye that could discern what matters in any given scene, and an understanding of tone which drips with life. 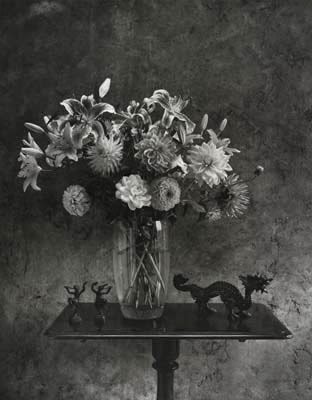 At the risk of his ire, this is from the IWMN site.

Still life with Cambodian souvenirs, Somerset, 1985
hangs within touching distance of images showing the horror of war, and a metre round the corner from a cycling slide show covering a whole wall.  The exhibition is punctuated throughout by screens on which we can see and hear him talking about the process of taking these photographs.

The whole thing is mounted in such a way as to bring the visitor back to the beginning, a circular trip which demands repeat viewing.

As a lazy Londoner, I don't make a habit of taking the train to Manchester in order to see an exhibition of photographs.

More fool me. The museum itself is a fascinating building, the sort that we have far too few of down here.  It rises imperiously out of the hodge-podge of redeveloped wharves and toy-town industrial estate lumps. 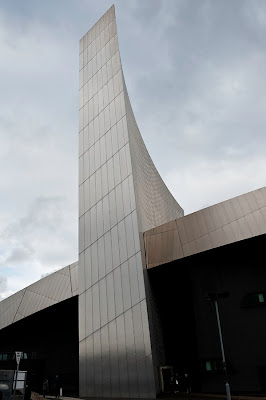 By curious coincidence, Libeskind's only London building is about the same distance from  Arsenal's Emirates Stadium as this one is from Manchester United's Old Trafford.  Even as an ardent Gooner, I was impressed by Fortress United, although the rather scrappy poster that they were daubing all over the front yesterday doesn't touch the roll-call of heroes currently wrapping Ashburton Grove.

But it's certainly time for a statue of Monsieur Wenger, perhaps in the style of the one depicting Sir Keith Park which now graces the Fourth Plinth in Trafalgar Square. (See next post)

Manchester had even more to offer. I wanted to visit the Manchester Art Gallery to see the Ron Mueck room and the Goyas.

Another heart-warming surprise. It's exactly what a city gallery should be, and the citizens of Manchester clearly think the same. It was teeming with visitors, but not the sort you see in London Galleries - no straggling crocodiles of weary tourists here, no babbling in tongues. It seemed that every visitor other than me was a Mancunian.

The shop had rows of postcards showing classic Turners, not one of which I'd seen. Had I missed a room? No, apparently not; they're just Not On Display. It takes some confidence from a museum director to keep the Turners in storage, and show the Kitsch Victorians. It works.

The Goya prints were the best examples I'd ever seen - and Jake & Dinos Chapman's perverted toy soldiers were in the same room.

The only problem with Manchester appears to be travel: you can only get there by Virgin Trains - or, as I heard one local saying to his phone: "On the Virgin." It's a small price to pay.
Posted by BOF at 12:40 No comments:

There are two pictures on show at the Saatchi Gallery which illustrate the problem I've found with gallery photographs (see "after the gap").

The first is a large print of an imaginary rubbish tip, stitched together from many images, by Rashid Rana. It's an impressive piece, verging on the abstract, but gaining power from a close inspection revealing the subject. The second is a smaller, more intimate image, of a female figure sitting on a rock over water in what looks like a cave. It has some haunting quality. Approaching the picture, it looks as if the photographer (Ryan McGinley) has deliberately avoided sharpening or noise reduction.

While the first is a more immediately striking piece, with size, colour, and subject all contributing to impact, it does not allow the viewer to feel it as an object: however closely it is approached, it is still a reproduction of some thing that exists, not an object in itself. McGinley's piece, on the other hand, has a raw existence of its own. The visibility of the noise, of the pixel structure that makes the image, provides a doorway into the viewer's temporary ownership of the picture.

This is not to detract from Rana's piece - but I like to find some involvement in any visual art pieces that I look at, and this provides two examples in the same building that illustrate my observation.

The Saatchi is good visit right now, not least because  Richard Wilson's wonderful 20:50 oil installation is there. I went to see it several times at Boundary Road, and was delighted when Burkham surprised me with it the other day. The only disappointment is that the walkway which takes you inside the piece is roped off, denying first-timers the real icing on its cake. Odd.
Posted by BOF at 11:38 No comments:

Matthew did take the turban off; in fact, he took everything off, showed himself as he was. He's a portraitist, so was capable of giving me a portrait.
I'm going to post the portrait series that has grown since then on my website . These are pictures which have resulted from a desire to photograph people rather than things, and from a continued grapple with the problem of high-resolution colour photographs. Meanwhile, here's Matthew. 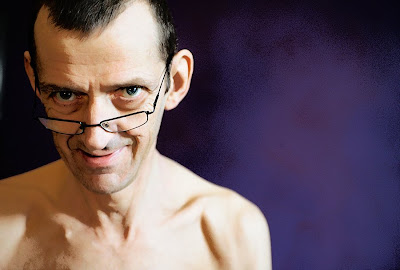 The big image, particularly the museum-oriented one, can have an alienating effect on the viewer. It is very difficult, sometimes impossible, to become as one with the picture, a process which occurs in a delightfully satisfying way with all other figurative visual arts to which the viewer is attracted.
The Boring Old Fart has been more than helpful in attempts to get to the bottom of this apparent problem. He suggested that it would be worthwhile trying to find out what's going on when we look. This led to the Bible of seeing, Vision Science, (Stephen E. Palmer, MIT Press 1999). For all I know, it's already out of date but, even if that's so, it creates a fundamental shift in an understanding of how we see.
Cutting to the chase, I am now convinced that attempts to make photographs more "realistic" are the root of the alienation problem. When we look at a painting, however super-real it might be, there comes a close-point where we can see the brush strokes. This allows us to become complicit with the artist, to form a direct connection, which then admits us to the interior world of the picture. The viewer can then move in and out, look at the picture as an object, go through it as a gateway, and taste its constituent parts. In short, it allows us to see in something like the way the artist intended.
The processes of sharpening and noise reduction in photography have the unintentional effect of preventing the possibility of this happening in the print. Their purpose is to remove, as far as possible, any awareness of the pixel. This implies a lack of respect for the very thing that makes these pictures possible. Further, pixels are what we use to see - they are the starting point for the vision process.
These little workhorses act both individually and in concert. It is the relationship between them that creates the image we see. Realising this, I have been attempting to give the pixel the clear light it deserves. If they are squeezed into smaller spaces, they group together in natural alliances, and produce something like fractal versions of themselves. These groupings can open up that gateway which was formally closed to photographs.
All this, of course, is about the photograph as an object, which is my main concern. Sharpening and noise reduction are completely valid in the photograph as a record, when the object itself should be as transparent as possible.
I will continue to post on Photo-Bof about progress. Should anyone happen on this blog, I'd be more than happy to enter into debate with them about all this. In the meanwhile, let's all show a little bit more respect for the pixel.
Posted by BOF at 09:07 No comments: