In the park today I came across these two objects, lying in the middle of the path, with no sign of an owner. They had prompted a series of super-fast movies in my head, detailing alternative possibilities for the story connected to the shoe and the sock. I noticed that others appeared to be doing the same thing and so began to photograph their reactions. 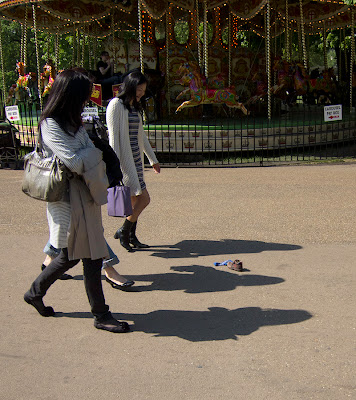 Not everyone noticed them. 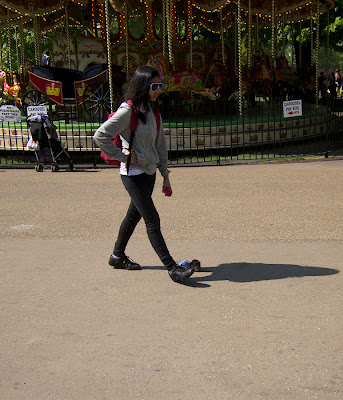 Then I stopped, because the thought that had entered my head seemed more pressing than making the pictures.

What if it had been me who put them there?

It's a very similar question to the one that landscape photographers ask themselves: if I move that branch out of the way, am I somehow cheating?

And then I became cross with myself, because it seemed as if I was making the same mistake as the viewer who says "Ah! But you've used Photoshop on that" as if there were some contract that comes with every camera, stipulating that all pictures made with the machinery must be a 100% honest and accurate record of what was there.

I suspect that, if I had put the shoe and sock there, I would have felt a duty to show deliberately some kind of knowingness in the images. Photographers like Gregory Crewdson have made careers out of single questions such as this, questions which non-photographers regard with deep suspicion and at which photographers groan inwardly. It seems a simple enough question but it isn't.
Posted by BOF at 12:49 No comments: