As-shot is rare for me. So often, I think of everything from the camera through to the printer as I'm pressing the shutter. The processing after the shot has been taken is still a part of the process of taking the shot.

I photograph Yellow Flag Iris leaves because they seem to collect and re-emit the light like no other leaf I know. Usually, it's a summer pursuit, but when the light comes out from a browning leaf, it's another brilliant performance. 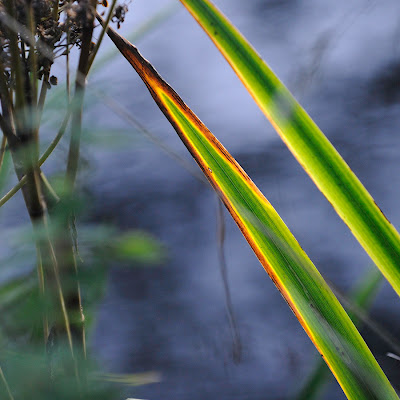 Check out a Horizon prog called Is Seeing Believing? on BBC iPlayer.

It's really about what used to be called cognitive sciences; that phrase must have gone out of fashion because it didn't come up once in the show. It does cover, in flimsy form, some of the ground opened up in Palmer's Vision Science. As ever on TV, it tries to do too much in too little time and so leaves everything it touches only half-covered, and allows the participants too much credibility. The german prof who keeps talking about "a new sense" is, of course, just a nuisance: her so-called new sense is in reality a re-trained old sense, touch. But the show introduces a fascinating subject. I hope there's more to come.


---------
The Sunday Times showed the winning entrants to its landscape competition this week, which will eventually materialize in the National Theatre.

There are some beautiful pictures, but there is also a worrying trend. It would seem that there are now landscape photographers who have got it into their heads that they have to use HDR for everything.

HDR stands for High Dynamic Range. An unavoidable fact about photographs in any root form is that they cannot encompass the same range of light as the eye/brain complex. RAW files can get close to it, but they're not photographs. So various techniques have evolved which allow for the extraction of information from a higher range than is technically possible. In simple terms, this usually involves taking two or more versions of the same image shot with different exposures and stitching them together.

If used subtly this technique enhances an image without being visible.

For some reason, the subtle approach seems to be out of favour. Instead, photographers are taking wonderful landscape images, and then perverting their look so as to make them appear exactly like computer generated images, as in the best of the console games.

It's a strange direction. The Sunday Times seems to like it. This has the bizarre result of making the winners of a prestige landscape photography competition look like the muddled ramblings of a teenage render-jockey.
Posted by BOF at 11:45 No comments:

The Scottish trip ended in England, or in border territories at least. Getting from Oban to Naworth, near Carlisle, was another journey of visual excess. By then, I was on a deadline, so couldn't stop much. It would otherwise have taken me several days. But Loch Awe demanded its name in attention. Ruins and bridges have special attractions in their look. Perhaps they fulfil similar functions, one in time, the other in place. In the right setting, there is a romance in both which allows man an un-arrogant place. 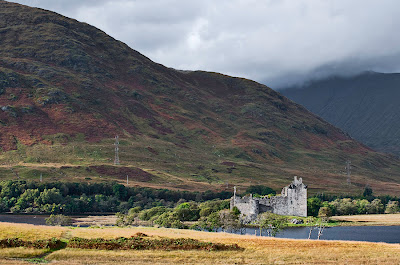 When an obviously-large structure looks small in its setting, we stop and look harder. If what we see says that nature's bigger than man, we nod wisely, and move on. Perhaps that's why I like pylons: standing next to one, it feels huge, dominant; but looking at its neighbour, and then the neighbour's neighbour, and so on, it becomes charmingly insignificant. 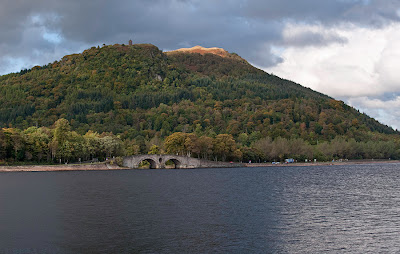 On Loch Awe, every man-made structure looks charmingly insignificant.
The bonny, bonny banks of Loch Lomond are as described. I was driving along one of those banks, and thinking that there should be something like a pit-stop, a place which had parking spots pointed at the view from a side road, so that the casual tourist could stop at whim and take in the view.
I pulled into a lay-by (of which there is an admirable culture in Scotland) and found precisely the thing I had been imagining. No fanfare, no explanation, but a viewing system designed for the car user and the view. Bulging blackberries nourished my self-indulgent picture making.  I was trying to take at least five different pictures in the time I was there. The result was that none of them were particularly good, even the three-stripes that I'd been making for the whole week.

An irritating question poked its head up, yet again. Why do I find all this so beautiful? If there's an answer to such a foolish question, it often seems to be about scale. The water and the sky conspire to make the mountains looks small, and suddenly a drama is happening. The element of drama that is lost in most still pictures is the movement, both of the clouds and the water, and even the trees in between. All those movements are slightly different. The great landscape artist - painter, photographer, writer, or composer - can capture that difference in movement and freeze it into a still but vibrant description. I'm still searching for that.
Posted by BOF at 18:24 No comments:

...and we're now at 13th October, despite having returned from the north on the 1st.

Apparently, there has been a temperature inversion in Scotland. I don't see this as surprising. That's what happens at this time of year. That's why we go looking for pictures now. 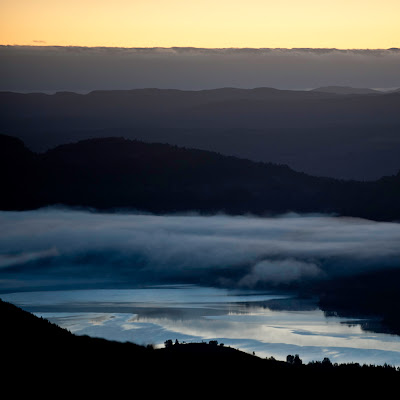 If you feel a sense of deja vu, that's because you've seen it before and not just here. 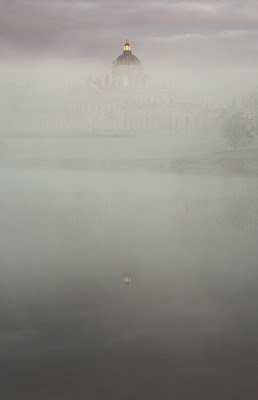 That layer, with its effortless division between earth and sky, is where we live. It can be confusing fog or fascinating mist, depending on who we're with, where we are, and what we want. 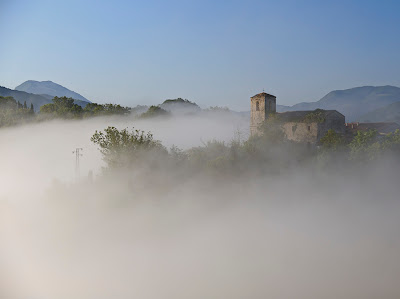 We find it beautiful, whichever it is, because it's where we are, blundering about in the fog between heaven and hell, and when the temperature inverts we can see what it looks like: cool, but fuzzy.
Posted by BOF at 21:44 No comments:

Not more than a few yards from the concrete stumps,  a robust hunk of rusting iron and steel lies on its side. It looks as if it was built to grade potatoes; when its intended use was no longer a requirement, it would appear that some bright spark tried to grade the pebbles from the beach... 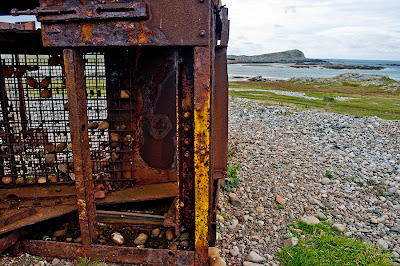 So we have, already: the simple strength of the look-out, the mysterious stumps, and the solid but decaying form of the rusting potato grader - all of them, when contrasted with the landscape around them, indicating the feebleness of man's efforts when compared to nature's. Or something.

But just over by the seashore, there are these structures perched on the rocks.. 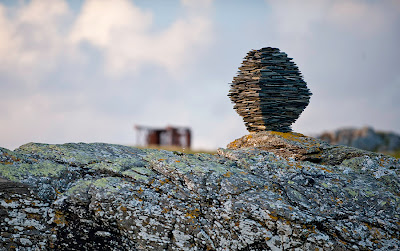 Some one, the some one mentioned at the beginning of the previous entry, has realised that there is already a sculpture park here, that he (or she) has something to contribute, and that they're damned if they're not going to do so. And contribute they do, to such an extent that copycats have appeared.

The largest of them dominates, and it's a few minutes before one notices just how many there are. Perhaps, when I return, they will all be gone. Or perhaps the beach will be covered in them. And that can only add to their beauty. Thank you to whoever made them.

look out for emerging sculpture

Someone on Colonsay has had a good idea and is carrying it out in a most engaging way. 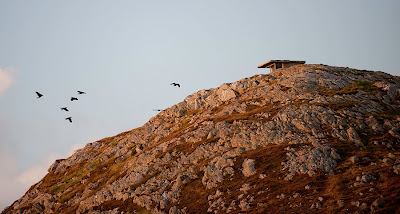 On top of a hill right on the shore stands an old coastguard's look-out hut. (That's what I assume it to be. If it isn't, then some of what follows is rubbish. Some isn't.) It's built in rendered brick and concrete. In England, anywhere, it would smell of urine. Here, it doesn't. Obviously, it's a great spot to look out from.  From many angles, the roof appears to come off the curve of the hill at a satisfying tangent.

The coastguards' huts around Filey and Scarborough and Bridlington and Whitby,  towns where I spent all my childhood summer holidays, were a sombre reminder of the serious power of the sea. They were guard emplacements. So it may be that I automatically elevate the significance of any image containing a coastguard's look-out. If so, welcome to my world. 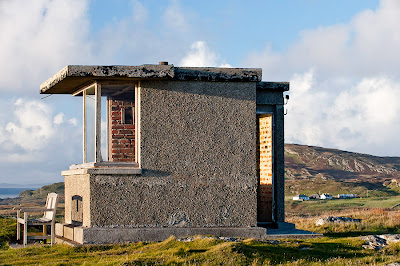 It's not stretching meaning to call this sculptural. The geometrics of the form are pretty pure and the tones sit well against the landscape. It looks good.

If this were all, I'd leave it at that but it's not. Down at the bottom of the hill,  eight rusting stumps stick out of concrete footings whose colours are now indistinguishable from the stones around; they are both clad in the same mosses and lichens and other crusty stuffs. What are they? 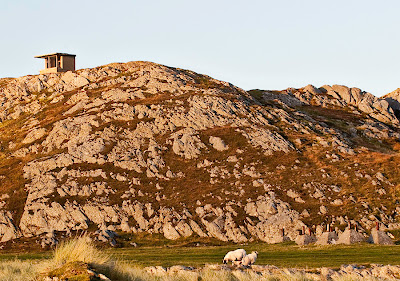 One of the many things that makes visiting slightly remote places such a pleasure is the scarcity of people. Places are often empty, unsullied by garish mankind in his day-glo trecking wear. Scotland's access laws are more liberal than England's and one visible sign of this is the wild camping law, which specifically gives the right to camp anywhere, roughly.

With rights come responsibilities. The Scottish law has guidelines attached to it on this subject, aimed at minimum impact. These guidelines need to be more strictly enforced, if it is possible to enforce a guideline. 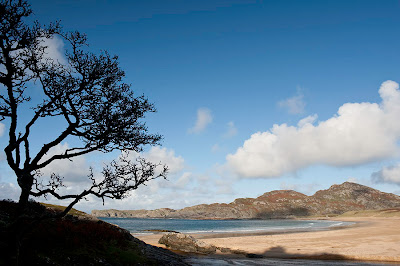 In places other than Colonsay, this beach would have been developed: as more people arrived to admire its curve, its colour, its balance, others would materialize to sell ice creams, meals, beds. Because more people don't arrive, the salesmen stay away and there is no place for developers. But the campers do come and they seem to be blind to a simple fact: if you set your tent up so that opening the flap reveals a fabulous view, your tent is starkly visible from within that view.

Tents used to be one of three colours: khaki, green, or off-white. Serious campers used to favour the khaki or the green, providing as they did a certain cohesion with the countryside around. Nowadays, the brighter the better is their watchword for clothes and tents.

Not 5 metres away when I took this was a garish yellow and green tent, visible from the entire expanse of the beach. The longer I was on the beach, the more I was aware of that tent.

The polluting campers returned on their bicycles. As I left, I was tempted to inflict a similar wound on their bicycles to the one they were inflicting on the bay, but I didn't have a portable crusher with me.
Posted by BOF at 16:23 No comments:

Travelling as the sole driver leaves little time for blogging. I'm now very behind, several days behind.  Let's pretend time has got in a muddle, and will happen soon as it happened a couple of days ago.

I am ashamed at how long it is since I did that drive. I've seen some of the most beautiful landscapes that exist on this planet, they're an easy drive from my front door and I have ignored them. They move from the rococo to the minimalist with all stops between. I hope I'll have a few images worth showing at the end. If not, the real thing isn't going to go away and I'm going back.